From Heraldry of the World
(Redirected from Nyasaland)

Your site history : National Arms of Malawi
Jump to navigation Jump to search 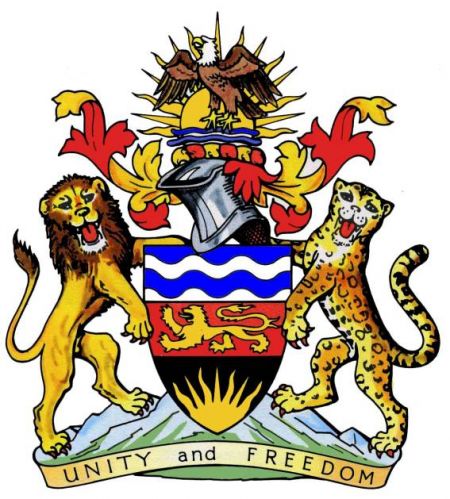 Arms: Tierce per fess: 1. Barry wavy of four Azure and Argen; 2. Gules, a lion passant Or; 3. Sable, a rising sun radiant Or.
Crest: On a steel helmet to the dexter, lambrequined Or and Gules, a rising sun radiant Or, charged with a fish eagle (Haliaëtus vocifer - Accipitridæ) hovering above two waves Azure, proper.
Supporters: A lion (Panthera leo - Felidæ) on the dexter and a panther (Panthera pardus - Felidæ) on the sinister proper.
Compartment: Mount Mlanje proper.
Motto: UNITY and FREEDOM, in black lettering on a ribbon Or.

The arms show in the upper part the waves for the Lake Malawi, in the middle the lion of England and in the base a sun, symbolising the rise of a new nation.

The supporters are a natual lion and leopard, the two largest predators in the country. The arms are placed on the Mulanje mountain range, the highest in the country.

The crest shows again symbols for the Lake Malawi (sea eagle, waves) and a sun. The motto is "Unity and Freedom".

From 1953-1964 Malawi was part of the Federation of Rhodesia and Nyasaland. 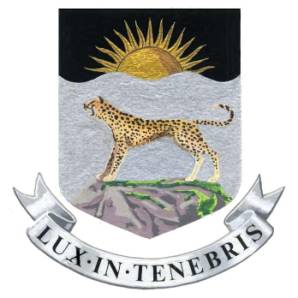 Argent, on a rock issuant a leopard (Felix pardus, Felidæ) statant proper and on a chief wavy Sable a rising sun Or.

The arms for the Nyassaland Protectorate were granted in 1914.

The panther on the mountain symbolizes the territory, the wave is for Lake Nyasa (Nyasa meaning: Big Water) on the borders of which the protectorate was situated. The rising sun symbolizes the light of civilisation rising over dark Africa. Such a sun can also be found in the symbol of the British East Africa Company (see below), accompanied by the motto LIGHT AND LIBERTY.

For the purpose, the motto LIGHT IN DARKNESS was translated into the latin LUX IN TENEBRIS 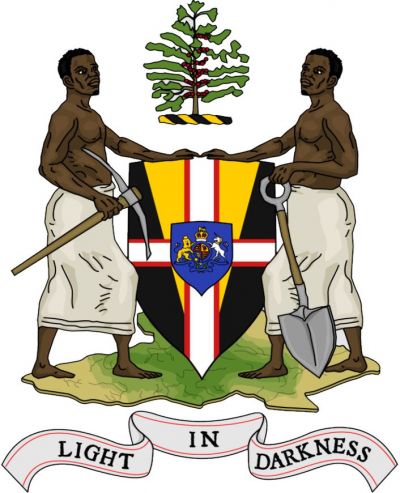 Arms: Sable, a pile Or, over all a cross Argent, fimbriated Gules, bearing an inescutcheon or augmentation showing the Royal Arms (on a shield Azure).
Crest: A coffee tree proper.
Supporters: Two negroes with pick and shovel, standing on the map of Africa, the point of the shield pointing at British Central Africa.
Motto: LIGHT IN DARKNESS.

The arms for the Nyassaland Protectorate were adopted around 1894.

This symbolizes for a large part the British intentions and missionary ideologies of the colonists. In the arms the golden pile of western civilisation penetrates the ‘cultural darkness’ of black Africa, by bringing the white cross of Christianty under the aegis of the United Kingdom (the inescutcheon). The main goal of this civilisation is economic development symbolized by the two black workers and the cultivation of coffee as the main cash crop. The shield itself points at the place where all this has to happen.

The purport of the achievement is, for greater security, explained by the motto: LIGHT IN DARKNESS.