From Heraldry of the World
Your site history : Oberbergischer Kreis
Jump to navigation Jump to search 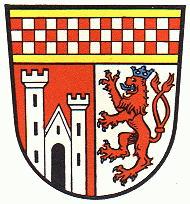 The arms are a combination of the arms of the former territories to which (parts) of the district belonged. The upper part shows the chequered bar of the County of Mark. The castle represents the Homburg castle, owned by the Princes of Sayn-Wittgenstein-Berleburg. The lion is the lion of the County of Berg, to which a large part of the district belonged. In 1938 the lion was granted without the original blue tongue. This was corrected in 1978.