From Heraldry of the World
Your site history : Obernburg am Main (kreis)
Jump to navigation Jump to search 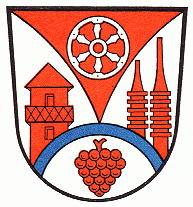 The upper part shows the wheel of the State of Mainz, to which the whole area belonged until 1803.
The lower part shows the river Main and the grape as a symbol of the important viticulture in the district. The two buildings are in the right part an old Roman tower and in the left part two modern pipes. The district was on the Roman Limes, the border of the Roman Empire. The two pipes symbolise the (former) Glanzstoff factory as a symbol for the modern industrialisation in the district.