From Heraldry of the World
Your site history : Oder-Spree
Jump to navigation Jump to search 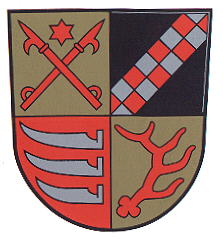 The first quarter is derived from the arms of the Bishops of Lebus, who had their seat of residence in Fürstenwalde. The second quarter represents Eisenhüttenstadt-Land. The former district was more or less identical to the possessions of the former Cistercian Abbey of Neuzelle (from 1286-1817), and the quarter thus shows the chequered bend of the Cistercian Order. The lower two quarters represent the former district Beeskow, which was made up from the Beeskow and Storkow estates. The knives are derived from the arms of the Lords of Strehla, the antler from the Lords of Biberstein. The first were Lords of Beeskow and Storkow prior to 1377, the latter from 1377-1518.