From Heraldry of the World
Your site history : Oestrich
Jump to navigation Jump to search 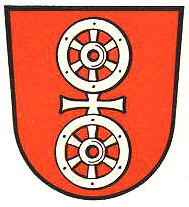 The arms show the arms of Mainz, as the town historically belonged to the State of Mainz. The seals of the town still showed from 1340-1627 St. Martin and the beggar, the patron saint of Mainz. The two wheels first appear in the 17th century on the seals, but have been used in the town since the early 16th century (on stones in the local church). Ever since these arms have been used by the town.