From Heraldry of the World
Your site history : Offenburg (kreis)
Jump to navigation Jump to search 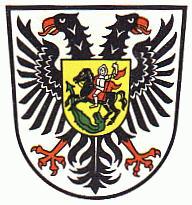 The arms are based on the arms of the Kanton Ortenau of the League of Imperial Knights (Reichsritterschaft), that also showed the Imperial Eagle with the patron saint on an escutcheon. At least 7 villages and 20 castles were owned by the League until 1806. The rest of the district was owned by Austria, as well as some local rulers. It also includes the Imperial Cities of Offenburg and Gengenbach.

As a combination of symbols for all these territories would be impossible, it was decided to use the arms of the largest rulers.