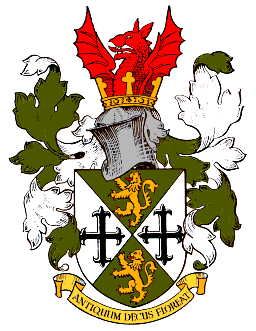 Arms : Per saltire Vert and Argent two Lions rampant in pale Or and as many Crosses Flory in fess Sable.
Crest : Issuant from a saxon Crown Or a Dragon's Head between two Wings Gules.
Motto: 'ANTIQUUM DECUS FLOREAT' - Let its ancient glory florish.

The gold lions on green are taken from the arms of the Robsarts, the distinguished ancient family prominent in the medieval history of Oldbury. The fact that Oldbury "Ealdanbyrig" was so called by the Saxons indicated that they found an ancient British settlement here.

The red dragon is that of the British, and the crosses and crown refers to the Saxons.