From Heraldry of the World
Your site history : Olsztyn (rural municipality)
Jump to navigation Jump to search 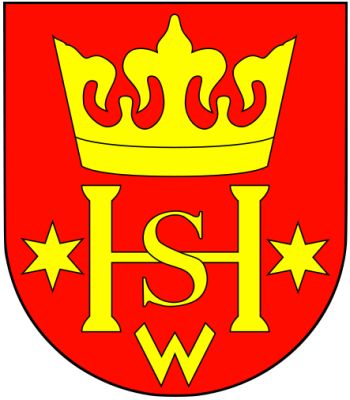 The arms were officially adopted on December 29, 2009.

Olsztyn Castle was built at the turn of the thirteenth and fourteenth century, and was mentioned under the names Holstein, Holstein, Olsten and Olstin, hence the initial letter H incorrectly interpreted as the initials of the city.

At the foot of the castle a settlement developed, which later became a town. In 1870 the city was deprived of its civic rights. The city used a seal with the letters H and S, crown and stars. This seal got lost, but was recovered in the 1980s and used as arms for the municipality. The design was formally approved in 2009.