From Heraldry of the World
Your site history : Oostkerke (Damme)
Jump to navigation Jump to search 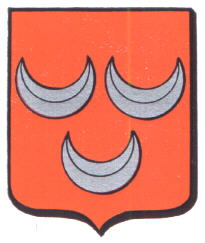 The arms are derived from the arms of the Lords of Oostkerke. The arms are first mentioned in the Gelre roll of arms from the late 14th century. They also appear as arms for the town on the 16th century map of the Vrije van Brugge area, see below.

The same arms are used by the village of Hoeke, but the relation with the Lords of Oostkerke is not clear.

The city of Monnikerede developed as a small harbour city on the Zwin in the 13th century. Due to silting, the harbour disappeared and the town was merged with Hoeke and Damme to one unit in 1594 (see Damme). The city was situated in the later municipality of Oostkerke, but no remains are visible.