From Heraldry of the World
Your site history : Oostmalle
Jump to navigation Jump to search 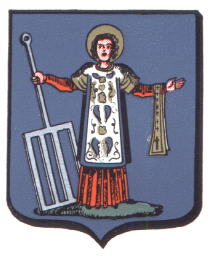 The arms show St. Lawrence, patron saint of the village with the grill. The saint also appeared on the older seals of the local council.

In 1819 the arms were granted in the Dutch national colours, as the mayor did not specify the colour of the arms. This was changed after the Belgian independence in 1839. At the same time the saint was shown in a much better way.