From Heraldry of the World
Your site history : Ophoven
Jump to navigation Jump to search 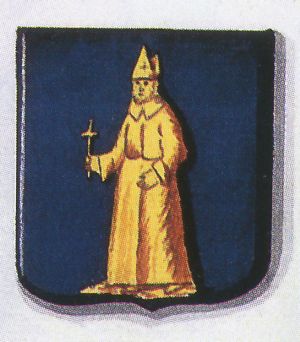 The arms show the local patron saint, St. Servatius, as was already used on the old seal of the council (see below). As in 1819 no historical colours were known, the arms were granted in the Dutch national colours. After the Belgian independance the arms were continued, with the same colours.

The old seal showed St. Servatius and a small shield with three horns, the arms of the Lords of Horne, who ruled the villages of Ophoven and Geistingen since the 13th century.