From Heraldry of the World
Your site history : Orange River Colony
Jump to navigation Jump to search 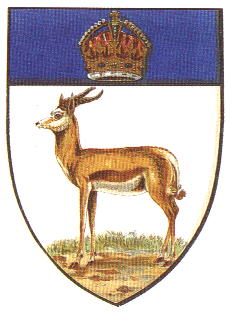 The Orange River Colony was created in 1902 when the British annexed the Oranje Vrijstaat republic.
In 1903 the new colony received its first seal, with under the Royal arms three springboks. On 10 December 1904 the above arms were granted, showing the springbok and the imperial crown. The springbok finally became South Africa's national animal and became one of the supporters of the (former) national arms.

Two other designs were proposed as arms for the new colony. The first proposal showed an orange tree, bearing fruit, and a chief with a rose between two heraldic fountains. The orange tree obviously was a canting symbol, whereas the chief was canting for the capital, Bloemfontein (flower-fountain).


The second proposal was more or less similar, with a slightly different, undefined (?) tree, but the main difference was the use of two springboks as supporters. The chief was the same.

The colony existed until 1910 when it was incorporated as the Orange Free State province in the new Republic of South Africa.