From Heraldry of the World
Your site history : Osie
Jump to navigation Jump to search 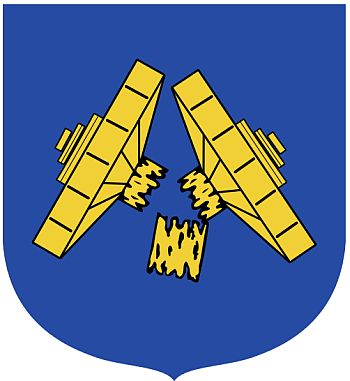 The arms are canting and show a broken axis of a carriage (the name means axes). The arms are based on a local story. The story tells that once a Prince was travelling through the area and the roads were in very bad condition. As there were many wolves in the forest, the Prince urged the coach driver to speed up, but unfortunately the coach got stuck in the mud. When trying to get the coach out, the axis broke. Fortunately they spotted a small hut nearby, where they could shelter. The owner welcomed them and as it turned out was a wheelwright. The next morning he fixed the axis and was well paid. He also received the broken axis as a souvenir. Later the village developed around this spot.