From Heraldry of the World
Your site history : Pervijze
Jump to navigation Jump to search 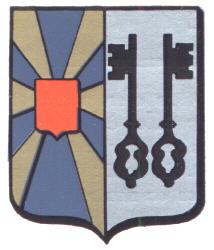 The left half shows two keys, which are derived from the old arms of the Berkel Estate, to which the village of Sint-Katriens-Kapelle (?) belonged until 1811, when the village was incorporated into Pervijse. The village used a seal with the keys already in the 17th century.