From Heraldry of the World
Your site history : Porirua
Jump to navigation Jump to search 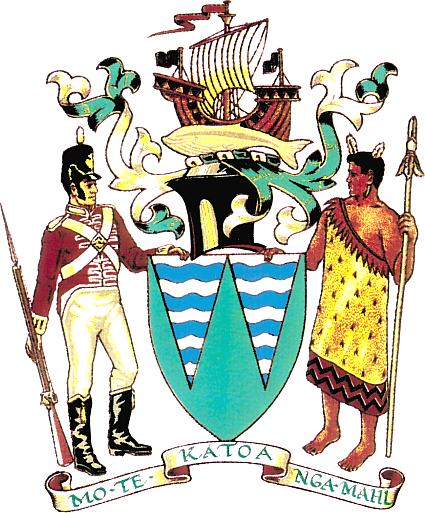 The shield is green and is charged with two piles divided into five silver and five blue wavy bars. The green colour of the field depicts the greenness and rural atmosphere of the countryside which existed when Porirua was first settled. The blue and white triangles (Piles) are symbolic of the two arms of the Porirua Harbour.

The crest is a Whale in natural shape and colour in front of an ancient galley with sail set red Pennon and blue flags flying. The whole surmounts a wreath of green and silver. The mantlings are green and silver with colours reversed on each side. The Whale recalls the main occupation of the first European settlers at Porirua and Titahi Bay whilst the galley, or sailing ship, recalls the ships which were so very much in evidence in Porirua Harbour between 1830 and 1850.

The Soldier supporter recalls that the 58th Regiment was one of the British regiments which spent some time in the Porirua district in the early days of its settlement. The Maori warrior symbolises the long association of the Maori people with Porirua.

The Motto "Mo Te Katoa Nga mahi" is translated "All That is Done is For the Benefit of All".