From Heraldry of the World
Your site history : Prenzlau
Jump to navigation Jump to search 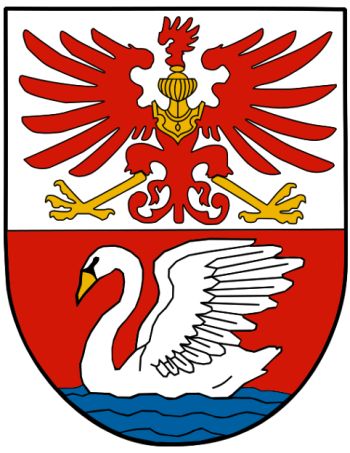 The oldest seal of the city is known from a charter from April 28, 1329, but may be older (in 1250 the city became part of Brandenburg). This very large seal shows a city view with a small shield with the eagle of Brandenburg. It has been used at least until 1443.

The second, smaller, seal is known from 1343 and shows the eagle with the helmet. The meaning thereof is not known. There is a local legend in which it is stated that is a punishment for the fact that the city voluntarily placed itself under protection of the Dukes of Pommern in 1425, and were forced later to return to Brandenburg. The seal, however, is a century older as the move to Pommern.

In 1705 the city approached King Friedrich I of Prussia to include the swan in the city arms. The King had been on an elaborate swan hunt in the city in 1704. The King granted the arms on October 28, 1705.