From Heraldry of the World
Your site history : Prince Edward Island
Jump to navigation Jump to search 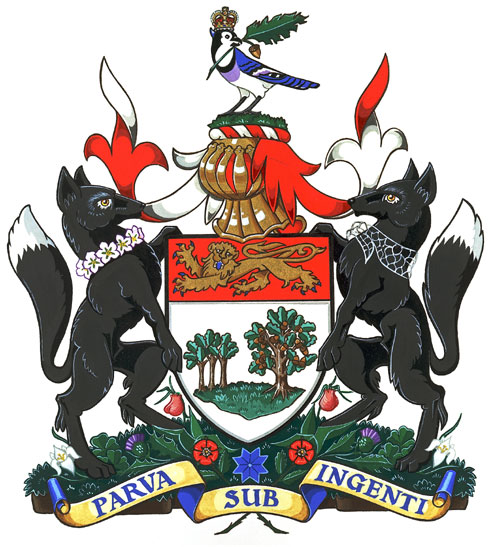 Arms : Argent on an island Vert, to the sinister an oak tree fructed, to the dexter thereof three oak saplings sprouting all proper, on a chief Gules a lion passant guardant Or.
Crest: On a grassy mount a blue jay (Cyanocitta cristata) reguardant crowned with the Royal Crown and bearing in its beak a leaf of the red oak tree (Quercus rubra L.) fructed proper.
Supporters: Two foxes (Vulpes fulva) Sable embellished Argent, that to the dexter gorged with a collar of potato blossoms proper, that to the sinister gorged with a length of fishnet Argent, both on a mount Vert set with a Mi'kmaq star Azure between lady's slipper flowers (Cypripedium acaule), red roses, thistles, shamrocks and white garden lilies proper.
Motto: PARVA SUB INGENTI

The shield is based on the design of the great seals deputed of Prince Edward Island in use since 1769. The oak tree and saplings allude to the motto. They have been interpreted as a reference to Prince Edward Island as a small colony within the British Empire, and latterly as the smallest province within Canada. The three saplings can refer to the three counties of the province. The lion is taken from the Royal Arms, and can also refer to Prince Edward, Duke of Kent, for whom the Province was named.

The blue jay is the official avian emblem of the Island. The red oak leaf in its beak is a reference to Prince Edward Island’s official tree. The Royal Crown worn by the blue jay indicates the Province’s co-sovereign status within Confederation.

The silver foxes symbolize the importance of the ranched fur industry in the Province’s history. The garland of potato blossoms represents the Island’s main agricultural activity, and the length of fishnet alludes to the fishing industry. The foxes stand on a grassy mound adorned by flowers and the Mi’kmaq eight-pointed star. This star honours the Province’s first inhabitants and traditionally represents the sun, which plays a central role in the spiritual lives of the Mi’kmaq people. It is depicted as if woven of porcupine quill, a popular Mi’kmaq art form. The rose, lily, shamrock and thistle symbolize the English, French, Irish and Scottish heritage of the early settlers. The lady’s slippers are the floral emblem of Prince Edward Island.

The motto means “The small under the protection of the great”, this Latin phrase is taken from Book II of Virgil’s Georgics, and has been used by the province since 1769.