From Heraldry of the World
Your site history : Principality of Paulovia
Jump to navigation Jump to search 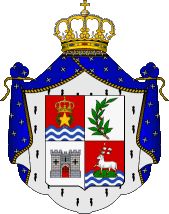 A micronation or virtual micro-state which is a historical, political and social simulation. Paulovia was formally established by HRH Prince Paul I on 31 July 1998 and made its internet debut as a virtual micronation on 27 July, 2005.

Although created for entertainment Paulovia has a serious side, supporting and promoting environmental, educational and charitable issues and associated campaigns through the Embassy and its consulates worldwide.

Paulovia does not claim any territory.

The Royal Arms of the Munro-Smith dynasty was adopted as the State Arms of the re-established Principality of Paulovia on 31 July 2005.

The whole is surmounted by a Greek style crown symbolising the royal Anglo-Italo-Greco connections of the Munro-Smith dynasty. 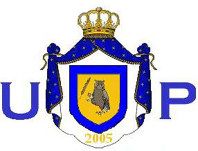 The arms show an owl as the symbol of wisdom and the Quill Pen symbolic of academic study and creative acts.

Literature: All information from http://www.paulovia.org