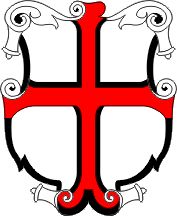 The arms were adopted in the 1990s, but are of much older design. The cross is the symbol of St. George, the patron saint of Ptuj. The saint appeared already in the 1273 on the local seal, and until 1657 all seals showed the saint. Later seals only show the cross, as his symbol.

Since 1567 rolls of arms have shown the cross as the main symbol, but there have been several exceptions, as shown below. Widimsky showed again the saint as the arms of the city. Lind showed a green shield with a red cross and golden star. This image has also been used by Ströhl and in the Kava Hag albums. Kobel showed again the cross.

In the 1970s and 80s Ptuj used a typical Socialist symbol as its arms, see below. 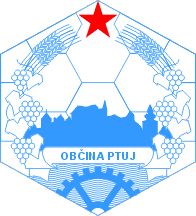