From Heraldry of the World
Your site history : Quedlinburg (kreis)
Jump to navigation Jump to search 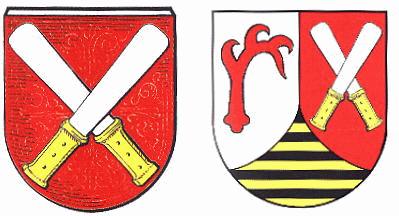 The arms are taken from the arms of the Abbey of Quedlinburg (Reichsstift), founded in 935 by Henry I of Saxony as a convent for rich Saxon noble girls. The abbey was highly independent and became a part of Prussia in 1802. The knives are special knives used at a buffet (Kredenzmesser)In the new arms the knives of the old arms were combined with symbols of the two other historical parts of the county, the antler of the county Regenstein and the fesses of the county Ballenstedt.