From Heraldry of the World
Your site history : Queidersbach
Jump to navigation Jump to search 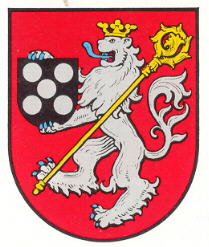 The silver lion in red is the arms of the Counts of Homburg, who in medieval times ruled most of the area. Later the Lords of Sickinigen acquired rights in the village, which is symbolized by their arms with the silver balls. The crosier stands for the Hornbach Abbey, which acquired possessions in the area as early as 981.