From Heraldry of the World
Your site history : Renchen
Jump to navigation Jump to search 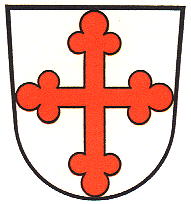 The oldest seal of the city is known since 1263 and already shows the cross. All later seals also show the cross, in (since 1687) or without a shield. The meaning of the cross, however, is not known. It has been speculated that the cross is the symbol of the local church, devoted to the Holy Cross.

The arms were officially registered in 1906, and did not change after the addition of Ulm and Erbach.