From Heraldry of the World
Your site history : Rheda
Jump to navigation Jump to search 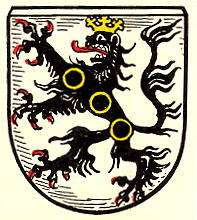 The arms show a black lion with three golden rings. The lion is the historical arms of the Lords of Rheda and was also used by their successors in the 16th century, the Counts of Betheim-Tecklenburg-Rheda. The original seal of the city showed a crowned lion with the rose of Lippe. In 1355 Rheda received city rights from Bernhard von der Lippe. The meaning or origin of the rings is not known, they probably were added as a misinterpretation of decorations on the seal. The rose of Lippe was removed in 1908 as there was no loger a connection with the State of Lippe.