From Heraldry of the World
Your site history : Saint Albans RDC
Jump to navigation Jump to search 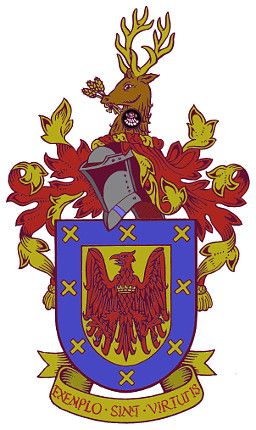 Arms : an Eagle displayed wings inverted Gules charged on the breast with a Mural Crown of the first all within a Bordure Azure charged with eight Saltires couped also of the first.
Crest : On a Wreath of the Colours a Stag's Head proper attired Or charged on the neck with a Pellet thereon an Escallp Argent and in the mouth three Ears of Wheat the stalks bound by a Riband Gold.
Motto: 'EXEMPLO SINT VIRTUTIS'.

The eagle refers to the district's Roman associations - Verulamium and Watling Street. The mural crown is a symbol of civic government and the gold crosses are from the arms of the City of St. Albans, eight in number for the eight parishes comprising the District.

The hart's head refers to the County and the wheat is for agriculture. The scallop shell, the badge of pilgrims, recalls their passage along Watling Street to St. Albans