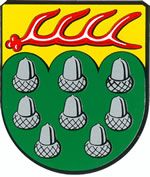 The arms show partly the geographical situation in the municipality, the green forested hills and the sandy soils. The eight acorns symbolise the eight municipalities in the Samtgemeinde. The deer antler in the chief is a reminder of the hunting lodge near Sögel, built between 1735 and 1752 by Clemens August von Bayern, Prince-Elect and Archbishop of Köln and Bishop of Münster. The red and golden colours of the chief are also the colours of the Corvey Abbey, to which the area belonged since the 10th century, as well as of the diocese of Münster, to which the area belonged from the end of the 13th century until 1803.

The following municipalities belong to the Samtgemeinde :