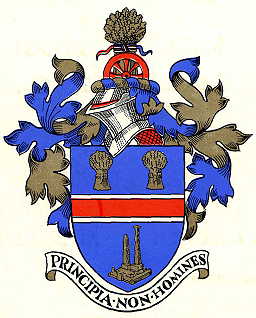 Arms : Azure on a Fesse Argent between in chief two Garbs and in base a representation of the Saxon Crosses of Sandbach Or a Fesse Gules.
Crest : On a Wreath Or and Azure in front of a Garb Or banded with Silk Ribbons alternately Azure and Gules a demi-Wheel of the last.
Motto: 'PRINCIPIA NON HOMINES'

The sheaves are from the arms of the Cheshire County Council and the Saxon Crosses have been a symbol of Sandbach for many years. The two sandstone structures are recognised as one of the finest Saxon monuments in Britain and are in the care of English Heritage.

The red half-wheel denotes the automotive and heavy engineering industries.