From Heraldry of the World
Your site history : Sarawak
Jump to navigation Jump to search 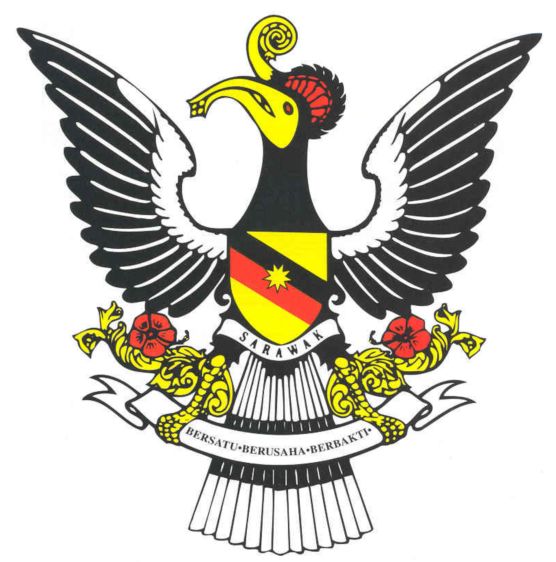 The arms were officially adopted on August 31, 1988, replacing the arms shown below.

The arms show the flag of Sarawak with a Rhinocerous hornbill (Buceros rhinoceros) as supporter with thirteen big feathers in each wing and as many in his tail. Thirteen is the number of states of the Malaysian Federation. The hornbill is a canting element, as Sarawak is known as ‘The Land of the Hornbill’.

The bird is placed between two hibiscus-flowers, given to welcome guests and being the national flower of Malaysia. Below the shield the name SARAWAK is placed and on the tail of the hornbill the motto "BERSATU . BERUSAHA . BERBAKTI" (United . Industrious . Devout).

The new arms were designed as the flag of Sarawak was changed. The original flag was too similar to the Czechoslovak flag and to avoid confusion, Sarawak chose a flag based on the oldest arms of the area. 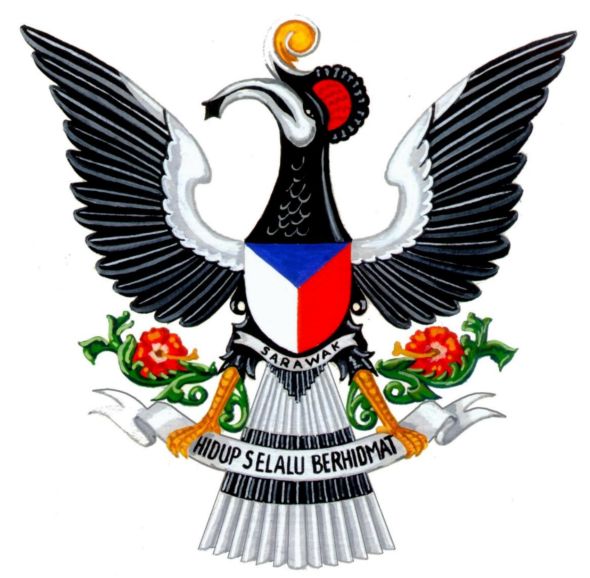 The previous arms were adopted on September 1, 1973 and have the same design as the present arms, except for the shield and the motto. The motto reads HIDUP SELALU BERHIDMAT (Live to Serve).

Sarawak was founded in 1842 by a British officer, James Brooke on a territory ceded to him by the Sultan of Brunei as a reward for military aid. His son, Sir Charles Johnson Brooke (1868-1917), adopted the arms below. His son Sir Charles Vyner Brooke (1917-1946) introduced a new version of the arms with the crest replaced by a five-pointed crown, the points symbolizing the five divisions of the kingdom. Shortly before WW II the engrailed was abandoned and replaced by just a cross parted per pale.

Because of the disastrous results of Japanese Occupation Sir Charles abdicated in 1946. On the 17th of May 1945 Sarawak became a British Crown Colony and a coat of arms was granted on the 10th of March 1947. These arms were based on the previous arms, but the crown was moved from a crest to the center of the shield. These arms were continued after Sarawak joined Malaysia in 1963 and were in use until 1973.

Literature : National and State flags and crests of Malaysia, 1963; http://www.hubert-herald.nl