From Heraldry of the World
Your site history : Schleswig-Holstein
Jump to navigation Jump to search 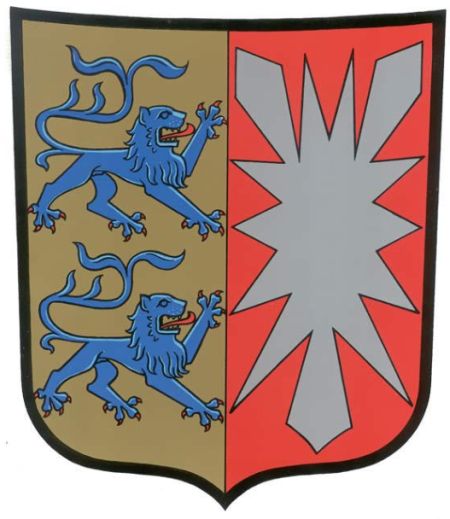 The arms are a combination of the arms of Schleswig and Holstein.

The arms of Schleswig are the three lions, which are derived from the Danish national arms.
In the Danish arms the lions are accompanied by leaves, which are not present in the arms of Schleswig. This is probably due to the fact that Schleswig was lower in rank than Denmark. The lions (often also shown as leopards) appear for the first time on the seal of Abel of Denmark in 1245. He was the founder of the Dukes of Schleswig. Ever since the lions have been the symbol of Schleswig and appear as such in the arms of the Danish Kings, as one of their territories.
The branch of the Danish royal family ruled Schleswig until 1375. From 1386-1495 the counts of Holstein were the vassals of the Danish King in Schleswig. Afterwards the Duchy was an independent Duchy in the German Empire. The Danish kings tried (and succeeded) several times in regaining their sovereignity in the area. The arms were not affected by the territorial changes.

The arms of Holstein show the Nesselblatt (nettle-leaf) of the counts of Schaumburg. The Counts of Schaumburg were also Counts of Holstein.
The oldest arms of the counts showed a lion until 1238. In 1239 the Nesselblatt appears on a seal of Count Johann I. The Nesselblatt also appears on the seals of other members of the family, including other branches of the family. The origin of the arms is not quite known. Due to its shape the figure was called a Nesselblatt. It is not used anywhere else unrelated to the Schaumburg family. It also appears in many civic arms in Holstein. The arms did not change during the many territorial changes of Holstein.

Literature : Stadler, 1964-1971, 8 volumes.
Information of coat of arms meaning from here. Thanks to Markus G. for providing it.