From Heraldry of the World
Your site history : Schwetzingen
Jump to navigation Jump to search 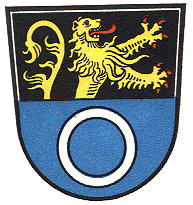 Schwetzingen was an unimportant village belonging to the Pfalz since the 14th century. In the 18th century the local castle was rebuilt and the village grew rapidly. In 1753 it became a town and in 1833 a city.

The oldest known seal dates from the late 15th century and already shows the present arms. The arms show the lion of the Pfalz and a ring, probably taken from the arms of Lord Hans von Schwetzingen. His seal dating from 1402 shows a wheel with 8 spokes. Why the spokes were removed is not known.