From Heraldry of the World
Your site history : Sende
Jump to navigation Jump to search 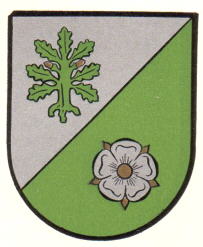 The arms are based on the etymology of the name of the village; which is derived from medieval German Sinethi, or heathland. The arms symbolise this with an oak tree (forest) and rose (Heiderose, Heide=heath).