From Heraldry of the World
Your site history : Sindelfingen
Jump to navigation Jump to search 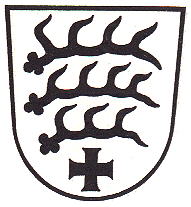 From 1840-1901 only a small cross was used as arms. The cross was used already since 1681 as a symbol on border stones, but was not used in any official document. In 1927 the cross was combined with the antlers, when the new arms were granted.