From Heraldry of the World
Your site history : Slovenj Gradec
Jump to navigation Jump to search 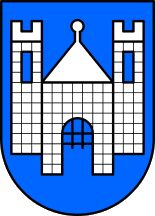 The coat of arms of Slovenj Gradec is based on the seal of the city from 1310, picturing the city gate with two watch towers. Historically the arms were often shown in different composition, with different shapes of the tower, with or without a mountain in the base and with red, green or blue shield.

There is also the possibility that the arms have been confused by several authors with the arms of Slovenska Bistrica.