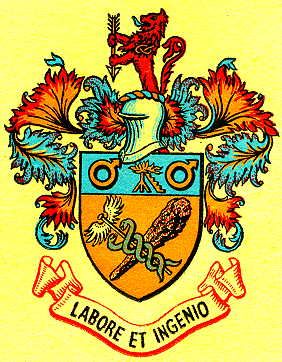 Arms : Or a Club in bend sinister surmounted by a Caduceus in bend dexter both proper on a Chief Azure a Beacon fired between two Symbols of the Planet Mars of the field.
Crest : On a Wreath of the Colours a demi Lion Gules charged on the shoulder with a Stafford Knot Or and holding in the paws an Arrow erect point downwards proper.
Motto: 'LABORE ET INGENIO' - By industry and ingenuity.

The arms were officially granted on November 15, 1907.

The achievement is derived from the heraldry of the pioneers of those industries which have made the name of Smethwick universally known. The caduceus of Mercury, god of commerce and the emblem of Mars are for the iron and steel industry. The club is from the arms of James Watt and the flaming beacon indicates the part William Murdoch took in introducing gas lighting.

The demi-lion is from the crest of Sir James Timmins Chance and the arrow occurs in the crest of Matthew Boulton. The Stafford knot on its shoulder refers to Smethwick's connection with the County.

The motto is that of James Watt reversed.