From Heraldry of the World
Your site history : South Australia
Jump to navigation Jump to search 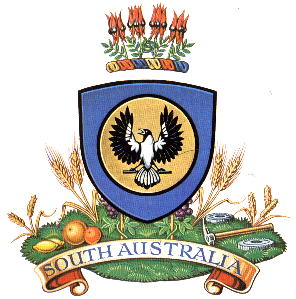 Crest : On a Wreath of the Colours, in front of a Staff Or, flying therefrom to the sinister a Banner Azure charged with five Stars, four of seven and one of five points Argent (repre­ senting the constellation of the Southern Cross), a Lion passant guardant Gold.
Supporters : On the dexter side a Female Figure vested, holding in the dexter hand a Cornucopia, and in the sinister hand a sheaf of Barley, all proper, and on the sinister side a Farmer, holding in the dexter hand a pair of Shears, and over his sinister Arm a Fleece of Wool, all proper.
Motto: 'Faith and Courage'.

Crest: on a wreath or Azure and Gules Four sprigs of Sturt's Desert Pea proper
Compartment: comprising a grassy mount and in front of two Vines growing therefrom each entwining their stakes proper on either side thereof stalks of Wheat and Barley and the dexter side scattered with Citrus Fruits and lying on the sinister side two Cog Wheels with between them a Miner's Pick also proper together with on a Scroll the name "South Australia

The arms show the State's bird, the piping shrike. The bird was already used unofficially before 1936 as well, see below). .The grassy mound and the symbols thereon represents the agriculture, industry and mining in the State. The crest shows four flowers of the State flower, the Sturts desert pea. The initial 1984 design also showed a helmet and koala and wombat supporters, see below. 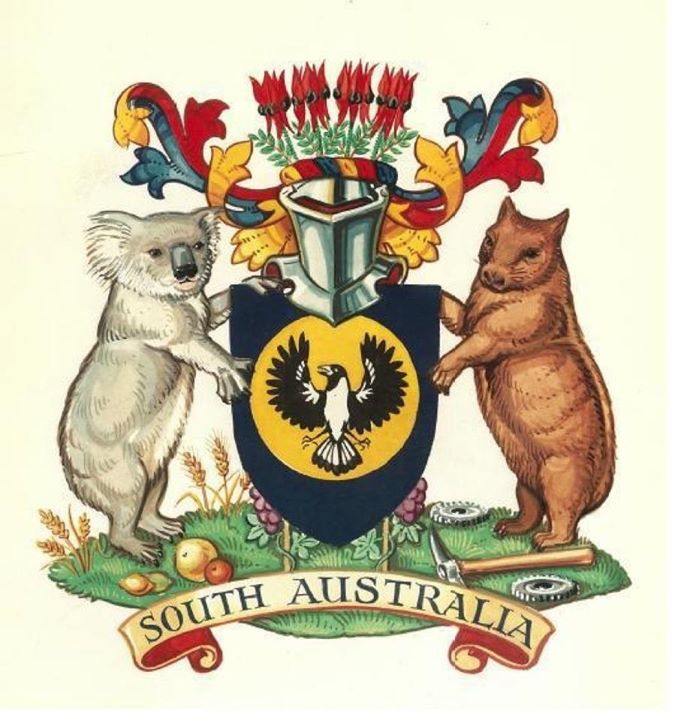 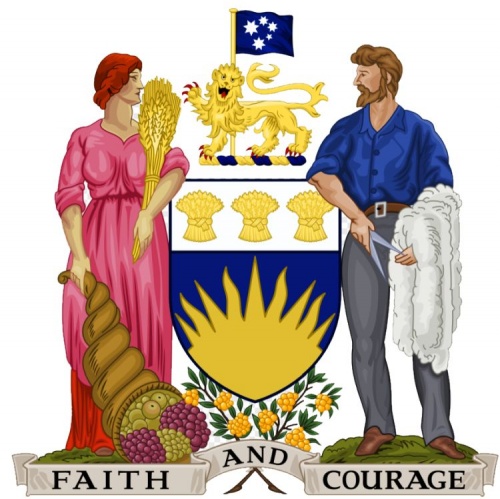 If you have any information on these arms Australia mail us !