From Heraldry of the World
Your site history : South Lanarkshire
Jump to navigation Jump to search 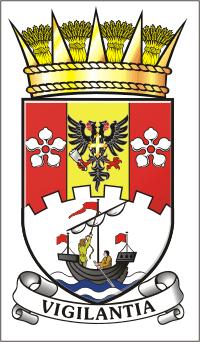 Per fess enarched and embattled Gules and Argent, in chief on a pale Or between two cinquefoils pierced Argent an eagle with two heads displayed Sable, armed and membered Gules, holding in his dexter claw an ancient hand-bell Proper and charged on the breast with a cross flory Or, and in base in a sea Proper, an ancient galley Sable, flagged Gules, therein two men Proper, one rowing, the other furling the sail.

Above the Shield is placed a Coronet appropriate to a statutory Area Council, videlicet:- issuant from a circlet eight paling piles (three and two- halves visible) Or and eight garbs (four visible) of the Last, banded Sable, and in an Escrol below the same this Motto "Vigilantia".

The motto "Vigilantia" (Watchfullness) was used by Lanarkshire County Council.