From Heraldry of the World
Your site history : Stefan Heße
Jump to navigation Jump to search 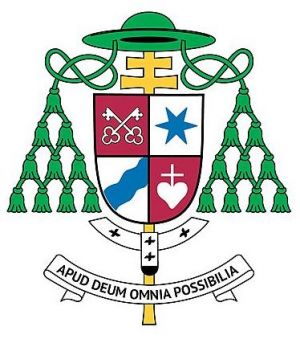 The arms show in the first quarter the crossed keys taken from the arms of the Archdiocese.

The second quarter shows a star, symbol for ST. Mary, patron saint of Hamburg and the cathedral. At the same time, the star is reminiscent of the open sky that St. Stephanus, patron saint of Archbishop Stefan, saw before his martyrdom (Acts 7, 56).

The third quarter symbolises the Rhine river, as the Archbishop was born in Köln. It also refers to the Elbe in Hamburg and the North and Baltic seas, which both border the archdiocese.

The fourth quarter is taken from the arms of the Blessed Niels Stensen, apostolic vicar of the Nordic Missions (1638 –1686).