From Heraldry of the World
Your site history : Stratford-on-Avon
Jump to navigation Jump to search 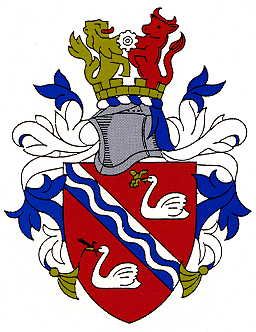 Arms : Gules a Bend per bend wavy Argent and Azure charged with a Bendlet wavy counter changed between two Swans naiant Argent that in chief holding in its beak a Sprig of Oak and that in base an Ear of Wheat both Gold.
Crest : On a Wreath Argent and Azure in a Mural Crown dexter a demi Lion Or and sinister a demi Bull Gules supporting between their forefeet a Cog Wheel Argent.

The red shield echoes that of Warwickshire County Council. Across the shield runs a white and blue wave for the River Avon. Swans are closely associated with the town of Stratford and they hold an acorn for forests and a wheatear for agriculture.

The gold lion in the crest was in the Southam RDC crest and the red bull was found in that of Alcester RDC. They support a cogwheel, representative of the engineering industry.