From Heraldry of the World
Your site history : Tauranga
Jump to navigation Jump to search 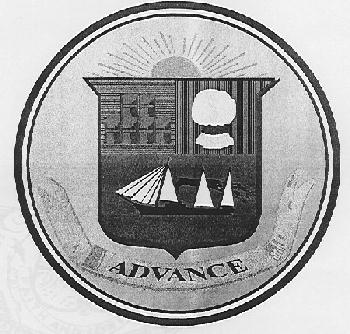 The council does have arms, but it is not clear whether these were officially granted. In 1959 the Town Clerk was asked by Council for the history of the Borough Seal but it appears that any record of its origin had been lost in a fire which occurred in 1902 when the original Borough records were destroyed. Apparently all he could find was that it had been used on documents as early as 1839.

The centre consists of a shield with three stacks of wool, a wheat sheaf and a steamer. A rising sun surmounts the shield and below is the word "Advance". The seal remains the same today except that the words Tauranga City Council were used instead of Tauranga Borough Council.