The National Arms of Mauritius

THE NATIONAL ARMS OF MAURITIUS 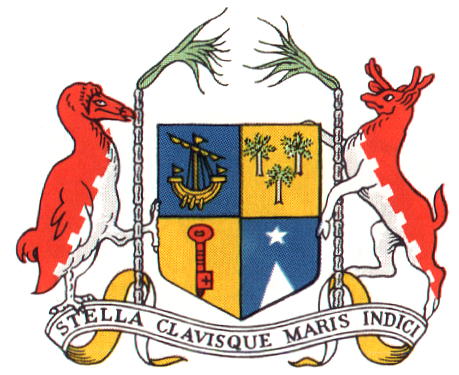 The ship in the first quarter refers to the European settlers of the island, the Portuguese, Dutch, French and English rspectively.

The second quarter show three palm trees for the tropical vegetation and the three dependencies of Mauritius, the Cargados, Agalaga islands and Rodrigues Island.

The key symbolises the strategic importance of the island. The fourth quarter shows the island as the star of the Indian Ocean.

The supporters are an (extinct) dodo (Raphus cucullatus) and a sambar deer (Rusa unicolor), symbolising the extinct and present wildlife.

The two green sugar canes indicate the importance of sugar for the local economy.

The motto "Stella Clavisque Maris Indici” means "Star and Key of the Indian Ocean" and is based on the lower half of the arms.