The National Arms of Serbia

From Heraldry of the World
Your site history : The National Arms of Serbia
Jump to navigation Jump to search 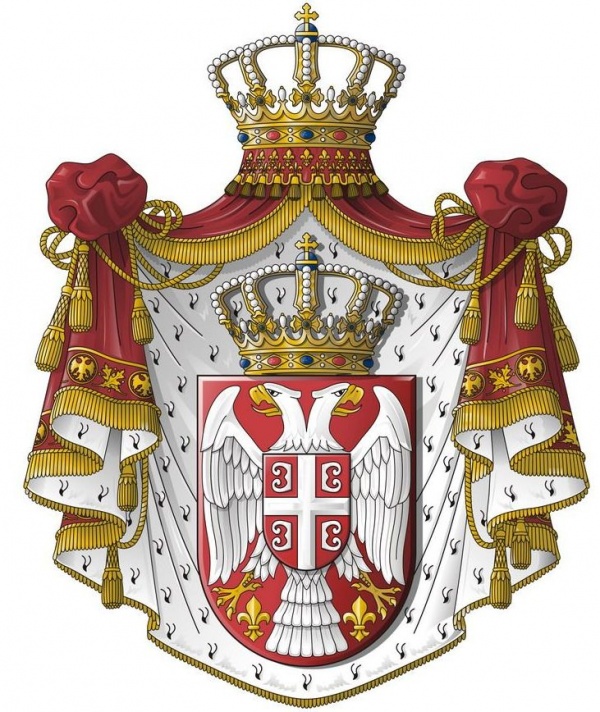 The main inescutcheon shows the historical arms of Serbia, a white cross with four firesteels. These arms date from the 14th century, the exact origin is not known, even though a number of stories exist.

The arms are definitely shown as national arms in the Korenić-Neorić Armorial (1595), which shows the coat of arms of Serbia (Svrbiae) as a white cross over a red background, with four firesteels, also depicting the Mrnjavčević noble house with the same design, with inverted colours and the Serbian eagle in the center of the cross.

Ever since the white cross and the firesteels have been the arms of Serbia.

The double-headed eagle also dates to the 14th century as a symbol for the Serbian Kings. It was already used previously, probably derived from the Byzantine Emperors. During the reign of Stefan Dušan (1331–1345), the double-headed eagle was used on everyday objects and state related documents, such as seals and proclamations.

The two symbols were only combined in the 1882 arms.

The principality used the Serbian cross as its arms, with a royal mantle.

The principality existed until 1882 when the Kingdom of Serbia was established.

The Kingdom of Serbia combined for the first time the eagle and the cross as described above. The arms used are the same as the current arms, see above.

During the Yugoslav Kingdom the arms of the different former entities/regions were still used, see the arms for Serbia below.

During the German Occupation in the Second World War a local government was established with the name Government of National Salvation. This government used the arms of the former Kingdom, but not the crown or mantling.

During the Yugoslav period the Serbian republic used a typical communist-style logo with a small shield showing the four firesteels, but without the silver cross. The eagel, being a Royal symbol, was also removed.