From Heraldry of the World
Your site history : Tower Hamlets
Jump to navigation Jump to search 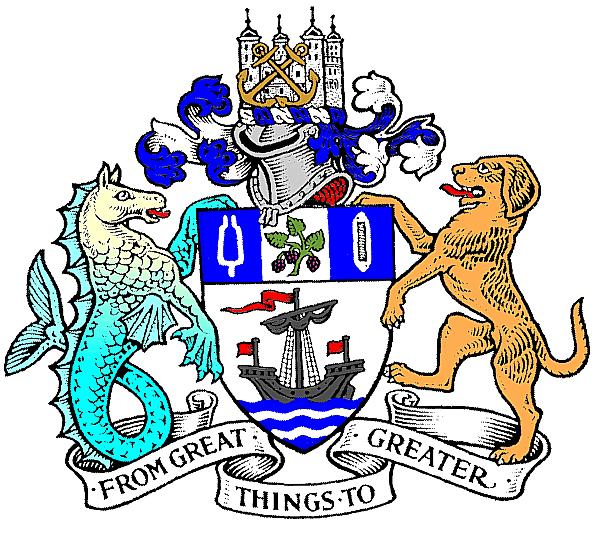 Arms : Argent out of a Base wavy Azure thereon two Bars wavy Argent a Lymphad sail furled Sable pennon and flags flying Gules on a Chief Azure between a pair of Fire Tongs and a Weaver's Shuttle a Pale Argent charged with a sprig of Mulberry fructed proper.
Crest : On a Wreath of the Colours in front of a representation of the White Tower of the Tower of London proper two Anchors in saltire Or.
Supporters : On the dexter side a Seahorse (Hippocampus) and on the sinister side a Talbot proper
Motto: From great things to greater.

The arms were officially granted on September 1, 1965, are based on those of Stepney, the only one of the three merging Boroughs to have official arms.

The ship symbolises the Borough's seafaring traditions. The chief is charged with a pair of tongs, emblem of St. Dunstan. He is the patron saint of Stepney. This ancient parish contained most of the modern borough. Next to the tongs is a sprig of mulberry. This represents the silk industry, mulberry trees being grown as food for the silk worms. The final charge on the chief is a shuttle, for the weaving that once took place in the area.

The crossed golden anchors stand for the Port of London, and they stand in front of a representation of the White Tower of the Tower of London, which gives its name to the Borough.

The dexter supporter is a seahorse, appropriate for a maritime district.

The sinister supporter is a talbot dog, for the Isle of Dogs, which makes up much of the Borough.The motto is an English translation of that formerly used by Stepney.