From Heraldry of the World
Your site history : Tržič
Jump to navigation Jump to search 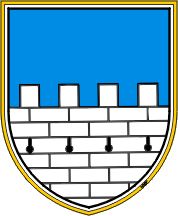 The arms are used at least since the 19th century and show a wall, sometimes with the doors in the base. The colours varied and were finally standardized in the 1980's.