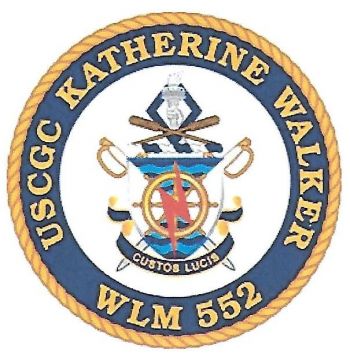 Shield: Per saltire barry Azure and Celeste and Argent, a ship's wheel Or superimposed by a lightning bolt palewise Gules.
Crest: From a wreath Argent and Azure a mascle of the like enfiled by a cubit arm holding an enflamed torch of the first (as of the Statue of Liberty) overall in base two oars saltirewise Proper.
Supporters: Two naval swords points down saltirewise Proper.
Motto: A scroll Azure edged doubled and inscribed "CUSTOS LUCIS" Or ("KEEPER OF THE LIGHT")


Seal: The coat of Arms as blazoned upon a white disc enclosed by a dark blue brodure edged on the outside with a gold rope inscribed "USCGC KATHERINE WALKER" above and "WLM 552" below in gold.

Blue, red and white are colour traditionally associated with the US Coast Guard. The saltirewise division of the shield symbolises strength. The Wavy basrs allude to the coastal Waters in which WLM 552 serves. The white areas suggests the beams emitted from a Lighthouse and alludes to the Mission of the Cutter tending Lighthouses, Bouys and Search and Rescue. The Lightning indicate the recent innovation in electronic navigation propulsion systems of the Katherine Walker. It also indicate the letter Z, for the Z-drive propulsion which on the Cutter replaces the traditonal shaft and propeller. The Ship's wheel represents guidance, leadership and aids to navigation. The mascle or diamond is used in Heraldy to denote the distaff side, The Hand holding the Torch alludes to Katherine Walker tending of the Robbins Reef Light in the New York Harbour, the Later indicated by the allution to the Statue of Liberty. The oars honour the saving of fifty sailors from shipwrecks by Katherine Walker. The Sword behind the Shield symbolise teamwork and maritime law enforcement.

Literature: image from The Institute of Heraldry, US Army