From Heraldry of the World
(Redirected from Uccle)

Your site history : Ukkel
Jump to navigation Jump to search 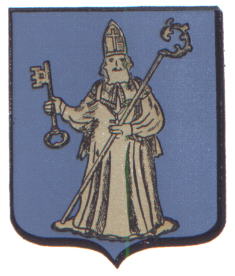 The arms show the image of St. Peter, the patron saint of the town. The saint already appeared on the historical seals of the local council. On the seals, however, the saint was sitting on a throne. In 1913 the mayor tried to have the arms re-granted in the proper way, but only a new seal was granted (see below), the arms remained the same.