From Heraldry of the World
Your site history : Upper Hutt
Jump to navigation Jump to search 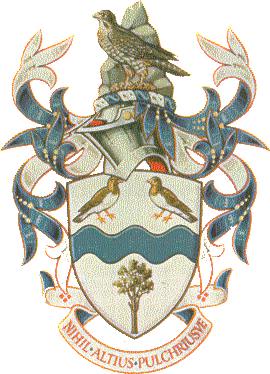 The Coat of Arms for the City was granted by the Royal College of Arms (London) in 1978.

The two birds in the Shield are Pigeons (Hemiphaga novaeseelandiae) representing the early bird life in the Valley's bush. The wavy band is a representation of the Hutt River and indicates its importance in the City of Upper Hutt. The bottom portion shows a Totara tree (Podocarpus totara) which symbolises the original vegetation that abounded on the Valley floor. Some are still preserved in Trentham Memorial Park and in early days many of these trees in the valley measured in metres across the butt and were a hundred feet in height before a branch appeared from the trunk.

In front of the rock in the Crest a New Zealand Falcon is portrayed. The New Zealand Falcon (Bush Hawke - Karearea) was very prevalent in the Upper Hutt Valley in earlier times and some still survive in the area. It preys on the forest birds including the pigeon depicted in the Arms and is described as probably the most fearless of all New Zealand's native birds.

Finally, the Motto translated into English means "Nothing higher or more beautiful". This was chosen to record that the City has special physical features and a lovely setting. The mountainous nature of some of the terrain (the City boundaries extend to the top of the Rimutakas and Akatarawas), the presence of the hills and trees that form so many of the views, the close affinity of the City and farm, and the varied beauty of the river valleys, form a combination within the City boundaries which is most unusual and could well be unique in the context of world Cities. The Council's advisors on the question of the adoption of the Motto felt that it was not appropriate to indulge in superlatives, and what has emerged is not an extravagant claim but a simple justified statement.