From Heraldry of the World
Your site history : Urach
Jump to navigation Jump to search 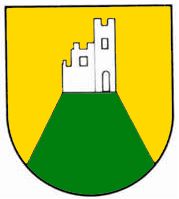 The arms were designed and adopted in 1909.

The arms show the castle ruin of Alt­ Urach near Lenzkirch, which is actually outside the municipality. The municipality, however, adopted the arms when these were proposed by the State Archives. The colour was in 1909 described as 'proper', but has always been used as silver.