From Heraldry of the World
Your site history : Uxbridge (England)
Jump to navigation Jump to search 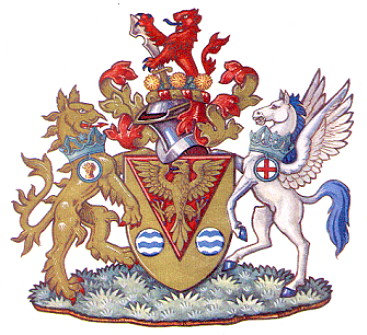 Arms : Or on a Pile Gules between two Fountains an Eagle displayed of the field.
Crest : On a Wreath of the Colours issuant from a Circlet composed of four Chrysanthemums stalked and leaved proper a demi-Lion Gules supporting a Seax blade upwards proper pommel and hilt Or.
Supporters : On the dexter side an Heraldic Tiger Or and on the sinister side a Pegasus Argent hoofed and crined Azure both gorged with an Astral Crown Vert and pendent therefrom a Plate fimbriated also Vert the dexter plate charged with a Garb proper and the sinister with a Cross throughout Gules.