From Heraldry of the World
Your site history : Velbert
Jump to navigation Jump to search 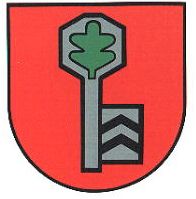 After the merger with the two other towns, the present arms were designed. The arms show the key of the old arms of Velbert, an oak leaf for Langenberg and the chevrons of the counts of Hardenberg for Neviges. Red and silver were the main colours in the three former arms. 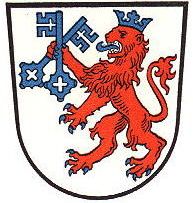 The previous arms were granted in 1882 and show the lion of the counts, later dukes, of Berg, who owned the area, holding two keys. The keys represent the typical lock making in the town (see also the county arms), which was characteristic already in the 16th century.