From Heraldry of the World
Your site history : Vlissegem > Vrije van Brugge
Jump to navigation Jump to search 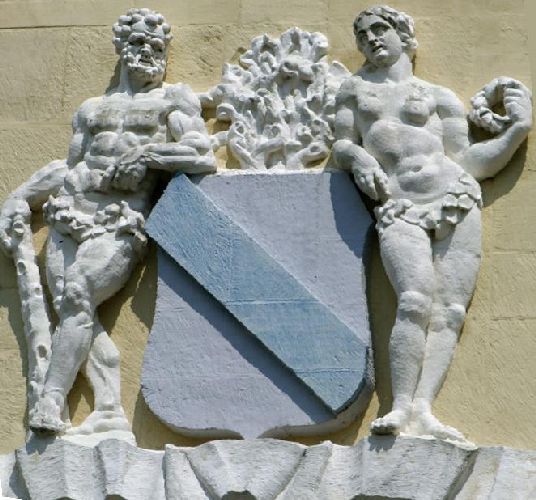 The Brugse Vrije was a castellany in the county of Flanders; it included the area around Brugge, and was bordered by the North Sea, the Westerschelde and the IJzer river. The city of Brugge was separated from the castellany in 1127. Since then the city and the Vrije were considered as separate customary law areas. The Brugse Vrije was a rich agricultural region. It had its own burgrave, who was seated at the Burg, a square in Brugge, and became part of the Four Members of Flanders at the end of the 14th century, together with the three major cities of Gent, Brugge and Ieper. The Brugse Vrije sat in the meetings of the States of Flanders.

The arms show a blue bend sinister in a silver field. The meaning thereof is not known. As supporters two savages were used. The arms have been used as such since at least the early 17th century.

When in the 17th century the Northernmost part of Flanders became Dutch (the Southern part remained under Spanish control), the Dutch part of the Brugse Vrije was separated as the Vrije van Sluis, which used the same arms until the end of the 18th century.

Many villages in Belgium and the Netherlands used the bend or the complete arms of the Vrije when granted arms in the early 19th century. See Klerken, Koolkerke, Stene, Cadzand, Groede, Oostburg and many more.

Two images of the arms of the Vrije from 1646 on publications/[pamphlets (one rather censored !):

If you have any information on these arms van Brugge mail us !