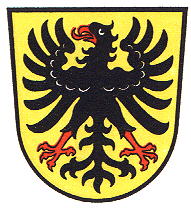 Waibstadt was already a fortified city around 1200, and was mentioned as an Imperial city in the second half of the 13th century. Even though the city was ruled from 1330-1802 by the Bishops of Speyer, the Imperial eagle remained on the seals and the arms of the city. Sometimes the eagle was shown with a small breastshield with the arms of Speyer, a blue cross in silver. But this composition has never been used on the seals or arms of the city itself.